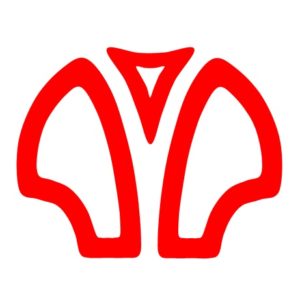 Enamel porcelain is build-up of three different glass components that combined provide a robust chip-resistance and a low surface hardness. The first is a high melting glasscomponent containing leucite crystals, which act as stressbreakers and provide chip-resistance. The second glasscomponent is opalescent and the third a low-melting glasscomponent, that causes a hydrothermal surface gelation. The leucite crystalline content increases the load bearing capacity during chewing and makes Enamel porcelain chip-resistant. The low surface hardness is obtained by an exchange reaction with saliva, which creates a water-rich and soft surface layer, with a hardness similar to natural enamel (HV 450-470). Opalescence is the optical effect of blue absorption, causing an orange tinge, when light is passing through. When light falls on the tooth against a dark background we can see that blue is absorbed. 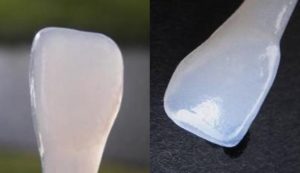 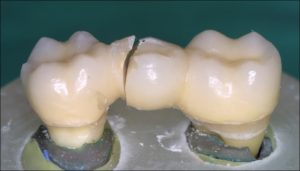 Enamel  in has a structure consisting of three glas component, of which one contains Leucite crystals. in fysical and clinical testing the chipresistance of Enamel porcelain was clearly proven. The photo shows a bridge that broke at a n average load of 144 kg after 1,2 million loading with 5 kg, without showing any chipping (Foto: Klinikum der Universität Regensburg). 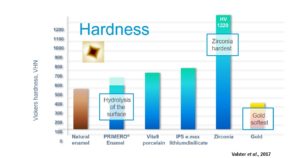 The surface of Enamel porcelain reacts with saliva bij exchanging sodium in the porcelain for water molecules from saliva. This “hydrothermal” reaction gives a soft surface layer with a hardness of 450-475, very close to the hardness of natural enamel. 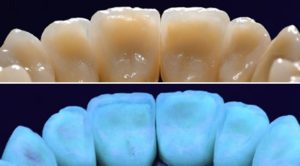 Enamel porcelain has a natural fluorescense. 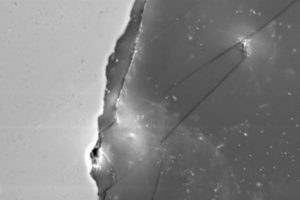 The adhesion of Enamel porcelain with zirconia is based on excellent wetting and an oxygen bridge with zirconia. The photo shows that a crack initiated at porcelain-zirconia interface remains in the porcelain. This is what we call an cohesive failure instead of an adhesive failure.

Reflection of light in full zirconia and Enamel porcelain

Because zirconia has a refractive index close to that of diamond and porcelain has a refractive index close to natural enamel we can see a difference in the flow of light through the restoration. In full zirconia restorations the reflection is superficial, while translucent porcelain layer gives a natural reflection on the zirconia with a color that appears “to come from the inside“.